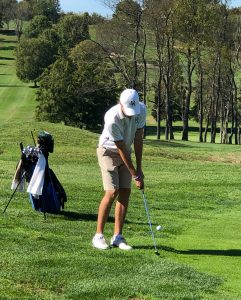 The Derry Area boys golf team just can’t get enough of the game.  First they extended the season by winning the Section 2 AA Title along with rival Mt. Pleasant to enter into the team semi-finals, and then they decided that wasn’t enough, they wanted another day in sun the on the links by placing 3rd in the semi-finals at River Forest Country Club in Freeport on Tuesday to earn one of six AA sports at Cedarbrook Gold on Thursday morning.  This, based on what can be found in past records, is the first time the boy’s team has entered into the championship bracket at Cedarbrook.  A combination of youth and experience has led DA on its path to the title match, along with shear desire and unselfishness.

When it was clear that DA was on its way to at least a share of the section title, the younger players wanted to win it for the seniors, Aidan Bushey and Devin Sheffler.  Never once did any of the team members lose sight of their goal.  They have been there for one another all season long.  Junior Ryan Bushey, Sophomore Nick Thomas and freshmen Antonio Hauser and Hunter Jurica will represent DA in the tournament tomorrow along with the two seniors.

The hard work they have put in since mid-August is paying off in October.  They want to be at practice. They make no excuses. They go out every day and work to be the best they can be.

No Events This Week

Events are added by athletic staff.
View All Events