Aidan Bushey gave up his high school baseball career to concentrate of golf and it was one of the most difficult decisions he ever made, but as his senior season came to a close, he became one of the most successful DA Boy’s golf team members in team history.  Aidan was recognized by the Section 2AA coaches as a section All Star, and the same group of coaches voted unanimously to recognize his accomplishments by naming him the section Most Valuable player.

Aidan helped guide his team to its second Section Co-Championship in three years, helped get his team into the WPIAL AA Finals, advanced to the Individual PIAA Western Regional , missing the cut by only four strokes, and achieving his goals along the way.

“Aidan’s season is an example of what hard work and determination can achieve. He made a huge personal sacrifice by giving up baseball his junior year.  A decision that he didn’t take lightly, but he saw an opportunity, and came to the realization that if he could put in a little extra time and focus on his golf game, he would turn things up a notch competitively, and he was right.  I hope that the younger players, both the boys and the girls, have learned from Aidan, that golf is a game that requires hard work, plenty of thought, and changing the little things in order to get better.  Time in the off season is just as important as it is during the season.  Practicing on the range and the putting green also matter. These are all things that younger golfers should take away from what Aidan was able to accomplish this season.  The great thing about golf is, you can go out and play from March through the beginning of August, and be at the top of your game when the first week of high school golf begins. We saw that in not only Aidan this year, but in some of our younger players as well.  They wanted a starting spot on the roster, so they put in the time prior to the start of the season.”

During the banquet held at Linden Hall Resort, Aidan officially passed the torch to brother Ryan, telling him that the team is “officially his team” now. A gesture that silenced the room. Ryan will be a senior next year, and is a three-time letter winner in golf. ” Ryan, much like Aidan, shows a willingness to help make the younger players better.  I have no doubt that will not change next year, and with who we have coming back, I anticipate another great year. 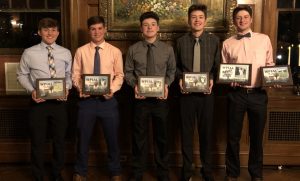 were recognized as all-section team members at Linden Hall Resort.

The banquet is hosted by Frazier Area’s Athletic Department.

No Events This Week

Events are added by athletic staff.
View All Events